The EZVJack rolling jack was designed out of necessity for a stable platform that would easily move a large vehicle around a shop on a hard surface. I had a building with a cement floor and wanted to move vehicles around to allow me to work on one or the other and store a car without hurting the tires or suspension. I wanted to be able to move the vehicle safely with one person. All the devices on the market had a lot of small hard-to-push wheels. My thinking was to have a larger caster wheel diameter and to have as few casters as possible to make swiveling easier and rolling resistance as low as possible. I settled on three casters in a tripod position so all three wheels of the rolling jack would always be in contact with the ground. I wanted to use simple shop equipment to work on the car so it had to fit around the ubiquitous hydraulic jacking device.
The EZVJacks would be used in sets of two giving one for the back of the vehicle and one for the front. We settled on a boxed in welded unit cut with laser and CNC machining that could be adjusted with pins and without tools without compromising torque resistance strength. Thus no connection is needed between the ends of the arms of the rolling jack allowing excellent adjustability. 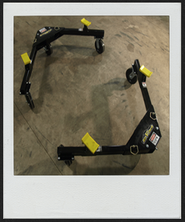 The wheel composition was also tested. The best all around wheel material I found was phenolic. It is inexpensive, resilient to fluids, is very light, is hard enough to have light rolling resistance, and is beveled so it swiveled easily. By making it 8 inches in diameter and 2 inches wide the capacity was very adequate at 1500 lbs. The height was decided on at 17 inches so it was within the lifting capacity of most hydraulic jacks but yet not too high to be unstable. It would bring the car up to a very easy level to work on and push against. The whole suspension or front or back of the car can be missing and the device can still support the remaining vehicle to allow it to be stored, worked on, or placed out of the way as parts are ordered.

I produced a prototype on my own cutting and welding as needed to make a device I could try out. Now it looks primitive, but my prototype worked even better than I thought it would and after using it for over 5 years I have been able to change the model slightly to make it a very usable finished product. Many improvements to this rolling jack have also been tested and incorporated. 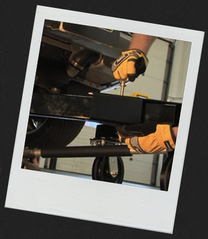 This rolling jack will become a tool that every shop will not be able to do without. It allows storage and also brings the car up to a level that body work and repair is easier and more ergonomic. Brake, wheel, and suspension work can be easily accomplished without tying up a lift as the car is slightly higher and the tire does not have to be held by the unit and possibly damaged. Its reasonable price point and extreme adaptability to car storage and working situations make it a most valuable addition to the production crew or even the hobbyist who wants to make the most efficient use of work space.

The EZVJack rolling floor jack will get your operation on the move. So let’s “Get Rollin!”